Supercharge coaching - dedicated to your potential

We are a team at Supercharge and take our role seriously

To give people the opportunity to be their best selves and achieve their goals and to foster an inclusive sporting community founded on teamwork and performance.

To establish Supercharge as the mainstream training pathway of choice, for people who want to improve their performance, experience greater personal fulfillment and by doing so achieve their sporting goals.

Respect – Treat everyone we meet with respect

Inclusion – Do not judge or allow prejudices to impact our behaviour

Partnership – Seek to understand, listen and learn from eachother

Community – Respect those who are experts in their field

Quality versus quantity – Find the unique solution for each individual need

Humility – Be of service and open to learning 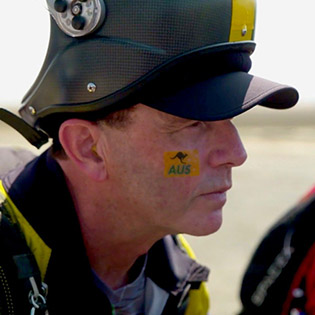 “I improved more over three days than I had done after years and 270 jumps, it was game on!” 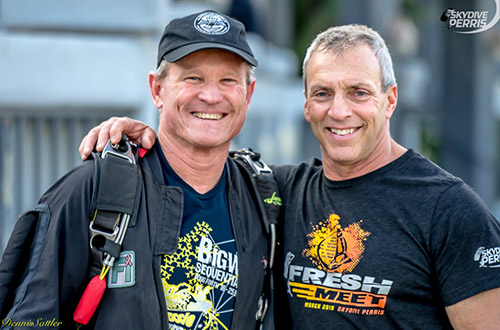 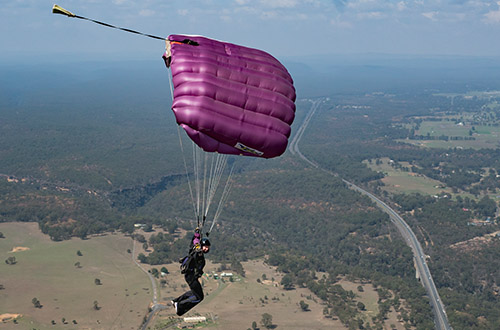 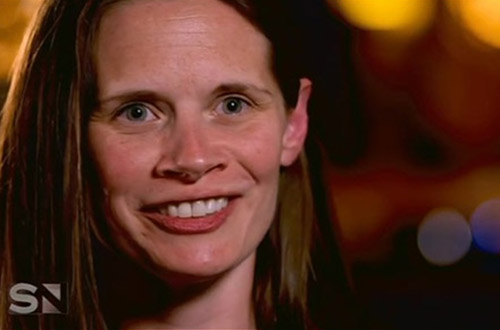 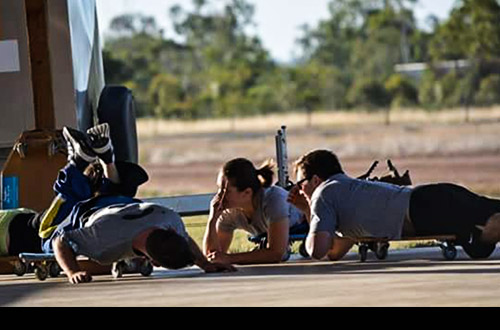 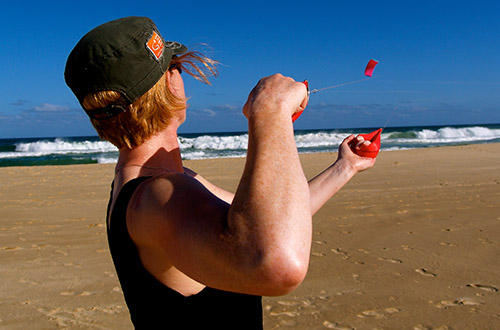 Supercharge coaches are experienced skydivers, accredited in the Supercharge system and dedicated to helping you achieve your sporting goals. They have a unique range of personalities, life and skydiving experiences, offering you a choice in coaching styles. 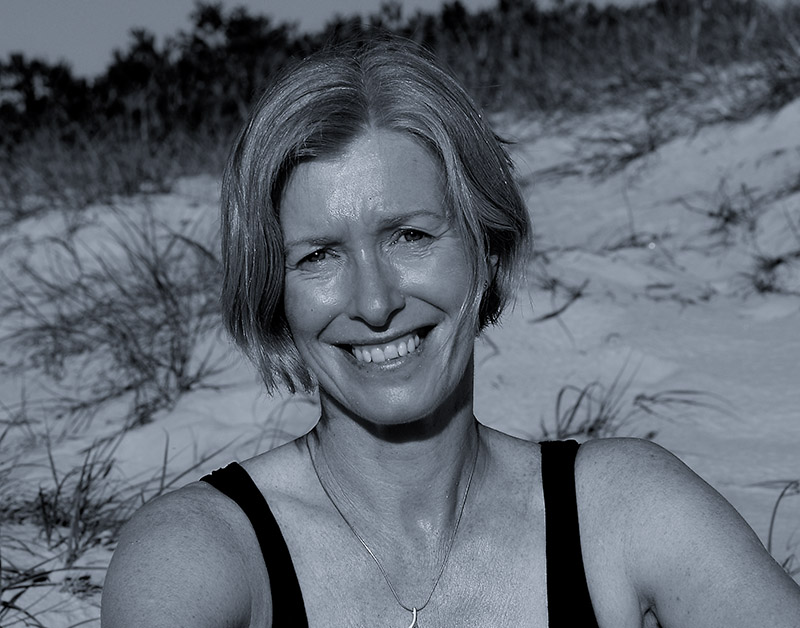 Melissa was born in Scotland. At the age of 16 she was looking for some adventure. It came in the form of a static line jump for charity and she was hooked!

Not exactly a natural and despite the weather, two round reserve malfunctions and a tree landing in front of her rather distressed father, she completed her student progression and with 100 jumps was qualified to jump with other people. Much fun has been had since then.

Competitive 4 way FS is Melissa’s passion. Since moving to Australia in 2002, Melissa has represented Australia several times, most recently as a member of Boomerang Betty at the 2018 World Meet. Her joy of big way skydiving began in 2010 when she joined the Aussie Bigway Team in record setting success, continuing as a record breaking team member in 2015 and again in 2019 as a member of the leadership and coaching team.

It was her observation in 2015 that many people were benched from the record team for lack of information that inspired her to create Supercharge Programs and to invest in herself as a coach. Now recognised as the ‘Queen of Personal Flying Skills’, Melissa provides a professional service through her Supercharge personal flying skills, 4-way and Bigway coaching with Aussie Bigways, driven to help people develop their personal and team skills and achieve their goals in the sport.

Melissa's message to you

Hi, I am lucky to have shared some amazing experiences with some incredible people over the last 30 years and I would not change anything. The memories, friends, challenges and joys are all worth it.

Many of you are on the cusp of your own adventure. You want to be part of invitational events, new records, create competitive teams, travel, share experiences and perhaps even win.

When I started jumping, there were no tunnels, no AFF, no tandems and the concept of ‘coaching’ was not mainstream. I remember talking to John McIver in the early 90’s over a beer in a pub in Auchterarder, Scotland. He was from ‘Sebastian XL, the UK 4 way team placed third in the world. I shared my frustration at my ability to fly to which he simply said, ‘why dont you ask me to coach you?’ and so I did!

In whatever discipline your vision, from VFS to the excitement of fast furious technical 4 way flat or the thrill of building something huge, each one begins with developing the flying skills for a high level of personal control and precision relative to others. Invest in yourself, build good habits as early as you can then let your adventure begin. 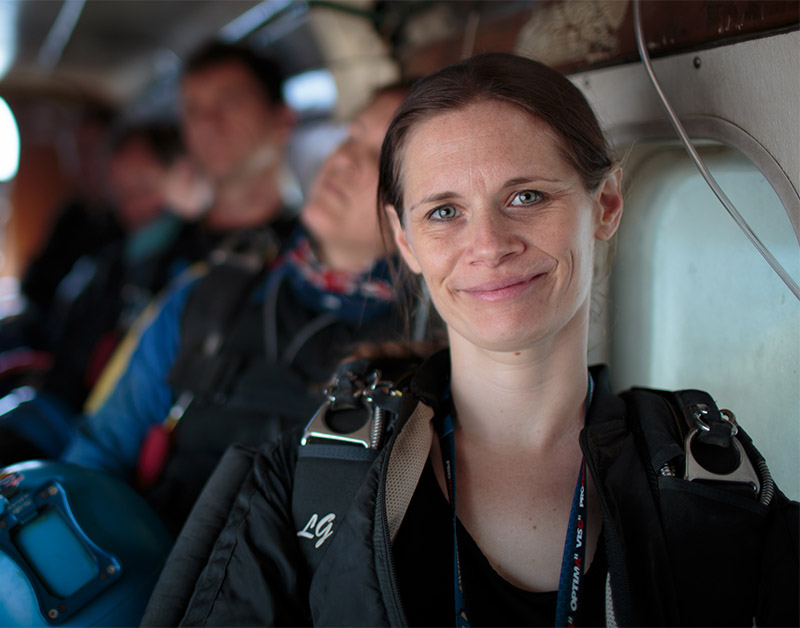 In a television interview, LG’s Mum revealed to the world that she was not always the adventurous type; in fact, “she couldn’t even climb a tree”… LG signed up for skydiving at 29 years old, thinking it would be a one-off daredevil experience. Instead, her AFF stage 1, which saw LG exit from a very intimidating skyvan and plunge straight into the delights of freefall, concluded with “when can I do this again?”

Fortunate to do her later B-rels with an avid FS competitor, LG joined her first 4-way team with less than 200 jumps. Since then, 4-way and 8-way competitions have been at the top of her list of goals, under the guidance of world class coaches. She has enjoyed being part of Australian and US teams and representing the country at World Meet.

Steered towards bigways by her friends, LG found fun and challenge in that discipline too. Her favourite event is the P3 Powerplay, where 4- and 8-way fast and precise moves meet complex large formations.

Such passion must be shared! Progression towards coaching was a natural step, particularly since this avenue is key to her and many others’ success. In the sky and in the wind tunnel (rumour has it LG spends more time in the tunnel than at home), you will always see a huge smile on her face. For good reason: that is where she can improve on her personal, team and competition skills, develop as a coach, and earn the privilege of playing a part in others’ journeys. Also laugh at her attempts to fly in diffrerent orientations, but that’s another story.

When Melissa first mentioned the concept of Supercharge to LG, she recognised the exciting potential for Australian flyers to develop at home, and dived head first into a coaching role on the program.

LG's message to you

Come join the lucky and elightened ones!

Who knew you could even jump by yourself, let alone make skydiving your sport, win medals and build records? I want to be the first female to jump from space; what’s your dream?

The people you end up trusting with your life, who you would never have thought would cross your path, the international travel to share indelible experiences with a whole world of such friends: just some of the perks of joining the skydiving family.

Do you want to become the best teammate possible and contribute your hard-earned skills towards success? This is where our shared adventure begins. There is no magic wand for most of us humans: we need to watch, apply, make mistakes, learn from them, learn from others, and repeat. I won’t promise it’s all smooth sailing and breezy from here. What I will promise is that it’s worth every single moment, through adversity to success, whatever you choose that to mean. There is no limit if you back your ambition with quality training.

Started jumping – 6 February 2005, Picton NSW Australia
First jump canopies – student gear with rip cord and a 270 main & 260 reserve. Does 0.5 even qualify as wing loading?
Progression nemesis – chicken wings in the tunnel. It took me ages to figure out how to keep those arms down.
Jumps now – 2600
Favourite slot – 4-way Outside Centre, 8-way Inside Rear. Genetically designed for Point and Tail respectively. I didn’t let that stop me; would you?
Most lead ever worn – 12 kgs
Skydiving claim to fame – Australian 8-way team member at the World Meet in Dubai, Australian bigway record holder (130-way) and World record holder (2-point 202-way). 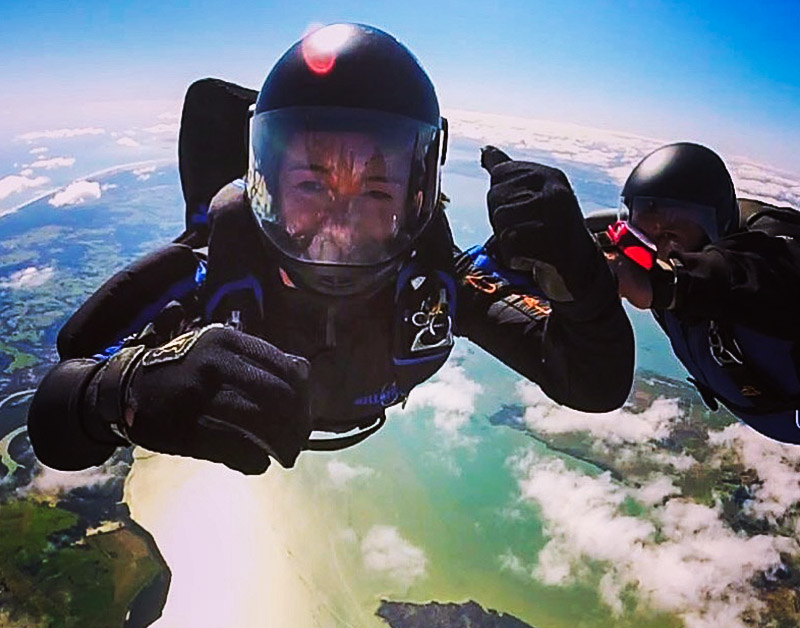 Petrified for her first 50 jumps…

Kate was born in Wales and migrated to Australia in 2007. The following year she bought herself a gift for her 30th birthday, an AFF 1 jump, and life was never same again!

Petrified for her first 50 jumps but encouraged by her instructors and coaches, she was driven to understand and overcome her fear. A B license and the ability to jump with friends changed everything. Then discovering that you could ‘compete’ with your friends in a team cemented her passion for the sport.

4 and 8-way FS became her preferred competitions and formed an incredible first decade in the sport. Various team performances allowed her to represent Australia at World Championships and World Cups; a collection of mind-blowing, ‘pinch yourself’ experiences. Joining the big way scene in 2010, again only because of encouragement from coaches and mentors, pushed her through boundaries that she had previously thought impossible. Kate is also a judge in Canopy Piloting.

Kate's message to you

Skydiving has brought me some of the biggest joys, challenges and experiences of my life. I cherish all of them and how they have led me to meet beautiful people and jump all over the world.

I benefitted from investing early in my skydiving, heading to the USA at 150 jumps for some tunnel coaching and the bigway experience. I encourage you to do your version of the same and find coaches and mentors who listen to your dreams and goals, then help you to make them a reality. This is really how it was for me; big dreams but little skill or idea how to get there! Mentorship, coaching and friends helped me to get better and experience more than I could have imagined.

I know that anything is possible for us all, with a little help from others and some dedication. I’d be honoured to contribute to you achieving your dreams and goals. Go for it! 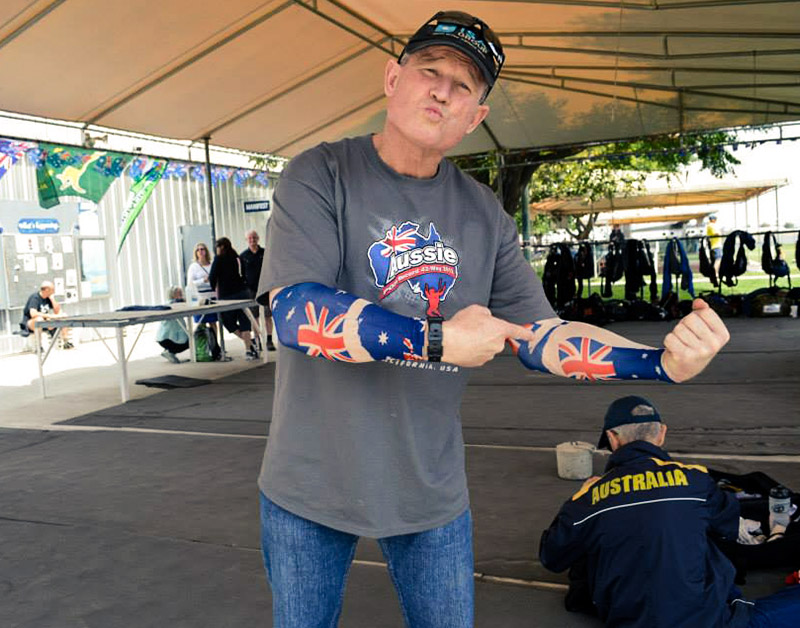 Parachuting was a required skill in the Special Forces.

His journey so far

Greg was born in WA and on completion of secondary high school enlisted in the Australian Regular Army at the tender age of 17. After 37 years of regular Army Service he transferred to the Reserve Force where he still works to today teaching basic and advanced parachuting techniques for 7 to 8 months of the year. Parachuting started as a matter of course with joining Special Forces with parachuting being a required skill, starting with Static Line and then onto Free Fall.

Progressing with the Military parachuting he now holds current qualifications equivalent to an APF Instructor/Examiner Rating in Static Line, Free Fall, Tandem and Tethered Bundle. He has also held an APF Instructor B Rating for over 25 years.

Greg has competed in 4-way FS at State and National level in AA and AAA but is currently between teams. His primary effort for the past decade has been leading the Aussie Bigway Team in record setting success 2010, 2015 and 2019 as Team Leader, participant and as a member of the coaching team.

He has supported Melissa Harvie in her creation of Supercharge and is one of her coaches, helping people optimise their personal and team skills and achieve their goals in the sport.

Greg's message to you

Why you skydive, no matter what path your skydiving takes you on, and irrespective of which discipline(s) you decide to focus on, is absolutely a deliberate personal choice and no path is better than the other.
Your journey starts with exposure to Instructors and those people may very well have made an indelible mark on why you have continued in the sport and/or what path you have taken or intend to take.

After over 40 years of parachuting and instructing, riding out its highs and lows and benefiting from all that experience gained along the way it is very obvious that seeking coaching to advance personal skills in whatever your chosen discipline is now an accepted and a very much encouraged process.
Developing your personal flying skills, flying with control and precision relative to others is the core of Melissa Harvie’s Supercharge Programs and I very much believe in and support her in offering this path for those willing to invest in it and their goals.

Stay updated, find an event, or schedule your training.